At the 1997 Golden Dawn Conference in London, a unique and enigmatic set of Enochian Tablets were displayed to the public for the first time. These tablets, once owned by Dr. William Wynn Westcott, were discovered a few years back in the archives of the SRIA, but there was no documentation to explain why they were made, or why they were so different from all other Golden Dawn Elemental Tablets. Not long after that conference, I had the opportunity to study these Tablets at length, making it my duty to document everything about these Tablets for future research.

Some features of Westcott’s Tablets were quite unique. Traditional Golden Dawn Enochian Tablets have a sigil at the top of each Tablet that is associated with one of four Elemental Kings said to be “angel overseers of the entire Tablet.” What is distinctive about Westcott’s Tablets is that these traditional sigils are nowhere to be found. Instead each Tablet has one of the lines from the Tablet of Union at the top where the sigil of the Elemental King would normally be found. (The Fire Tablet has the five squares/letters of BITOM from the Tablet of Union; The Air Tablet has the five squares/letters of EXARP, and so on.)

Additionally, the Tree of Life is painted on the individual canvases in such a way that only half of each sephirah is shown, since they “run off” the sides of the canvas. The Tree of Life is actually reversed in two of the Tablets. The Fire and Earth Tablets show the Tree as it is normally viewed—with Chokmah, Chesed, and Netzach on the right, and Binah, Geburah, and Hod on the left. However, the Water and Air Tablets have Chokmah, Chesed, and Netzach on the left, and Binah, Geburah, and Hod on the right. It would seem that the four Enochian Tablets are meant to be used as a representation of a three-dimensional Tree of Life which encompasses the Four Qabalistic Worlds. And this is perhaps why Westcott’s Enochian Tablets are the only Enochian Tablets that fully utilize all four Color Scales of the Golden Dawn. 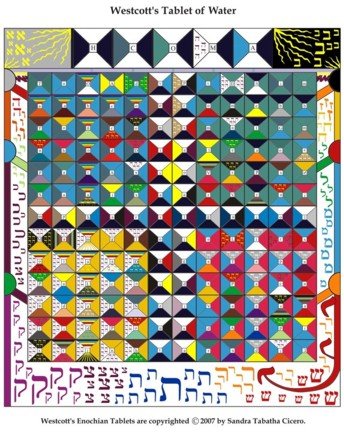 This is a great, informative post. Thank you for starting this blog!

I am so excited to see this blog! Thanks for sharing this information. I'm already "following" for more. 🙂

Thanks, just when I thought Enochian couldn't become more complicated! 🙂 just kidding of course, kind of…
This is a wonderful blog!

hi Tabatha, good to see a blog of this valuable nature coming up. I'm only just beginning to really appreciate Enochian, as my upcoming article in HV shows 🙂

Great to this blog (just got link from Aaron).

Off now to read the HV article. I hear there's a book following – any details?

Can you post a larger version of this tablet, its hard to see all the detail.

Hi Tabatha, Awesome job, both on the article and the blog!

Thanks for contributing this to the GD world! It's much appreciated by myself and everyone in our Temple!

Long time overdue if you ask me. 🙂

So refreshing to see you in bloggerville, Tabatha. Looking forward to more. I still remember the seminar on this you did at the Western Mystery Conference in Austin.
Adam Smith

The half-sphereroth painted on the edges of each tablet, having 2 of the 4 Elemental Tablets in reverse order, is obviously the "Projection of the Tree of Life onto the Celestial or Terrestrial Sphere"…having them projected on the Terrestrial sphere would make sense, as all 4 elemental tablets make up the Great Earth Tablet, and are composed of the names and sigils of the 91+1 Governors of the Earth.

This is a quote from my forthcoming paper in HV. I don't pretend to understand it fully, it comes right at the end of the ritual I propose, and was the ultimate skry episode before "winding down". It is definitely Enochian, and as I'm in no way an expert, I put it here for comment.

"A blazing bright plane with a pyramid…a bright sun overhead.

The Enochian Governors appear.
Each "Tablet" is aligned on the Equator in all four directions and the Black Cross runs through the person sitting on top of the pyramid, or through the stone letters like energy swirls, that which has to be "grasped".

Stretch out an arm: the shimmering increases
Now the tablets "fall" or "fold" in, waiting to be "four square", folded like onto a Globe. But that is an "echo"– the brilliant ones are still out and beyond, the globe is echoing them.

Arm movements, like flailing cones a sense of apocalypse?
First 2 then 4 then 72 cones all intersecting into stone, an unveiling, the line-up is an almost perfect consciousness that recognises it and chooses to evolve"

Does this reonate with any more technical view of how the Tablets work?

Great to see you blogging; can't wait to read the latest HV!