Last weekend Chic and I had a fantastic time at Pantheacon, the largest indoor metaphysical, occult, pagan, and esoteric convention in the U.S., held every year in San Jose, California. The theme for the event this year was (very appropriately) “Co-operation, Tolerance, and Love.”  This was our second Pantheacon and as far as I am concerned, the event just keeps getting better. The convention is amazingly efficient and well organized.

We arrived on Thursday afternoon and had a restful evening. On Friday morning we headed down to Registration and the Green Room for badges, programs, etc. By early afternoon the Vendor Room was open and we ogled the various goods. (If you can’t find something wonderful to buy at Pantheacon, you’re just not trying at all.) Later we joined in a panel discussion on “Community Connections” with fellow Llewellyn authors Melanie Marquis, Donald Michael Kraig, Patricia Lafayllve, and Thea Sabin, with Elysia Gallo as our MC. The discussion was well received and I think we all learned something from it. That evening we headed off to the Llewellyn party to hobnob with some very cool folks.

In the evening we attended a lecture on “The Modern & Improved Rite of (Theurgic) Sacrifice” by Sam Webster, based on the teachings of Iambichus in his Neo-Plantonic masterpiece De Mysteriis. This was followed by an “Invocation of Thoth Hermes Mercury” in the Open Source Order of the Golden Dawn’s suite.

Saturday morning I attended Holly Kraig’s Intermediate Yoga class, which energized me for the day. And I needed it–because Chic’s lecture on “Tarot Magic” later that afternoon was packed to the rafters. We quickly ran out of hand-outs (I had printed 65 copies) and some of our friends who had wanted to attend the lecture could not even get in the room. Immediately afterward we had a book signing at the Llewellyn Table just outside the Vendor Room. We spent Saturday evening socializing with old friends and meeting new ones.

Sunday morning I gave my lecture on “Enochian Color Magic” which also went very well. Later, our good friends in the Golden Dawn community managed to pull a fast one–we had a surprise appreciation dinner party for Chic in the OSOGD suite. Sam Webster’s toast was deeply moving and Chic was caught totally unawares. We presented him with the gift of a statute of Hermes that was purchased at the convention. After the party we caught the last half-hour of Lon Milo Duquette’s concert, “Songs of Love, Magick, and Devotion” at Club Max. Lon is fantastic (as always!).

We were back on a plane to Florida at a ridiculously early hour on Monday morning, but with lots of good energy from such a positive event. Many thanks to Glenn Turner and the Pantheacon staff for running and organizing such an incredible convention. (Again!) 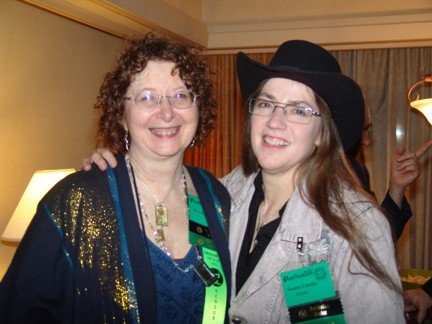 With Mary Greer at the Llewellyn party. 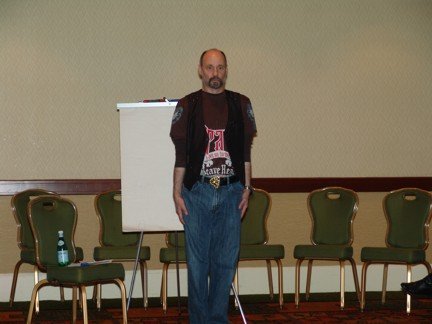 Sam Webster after Chic told him to “look animated!” 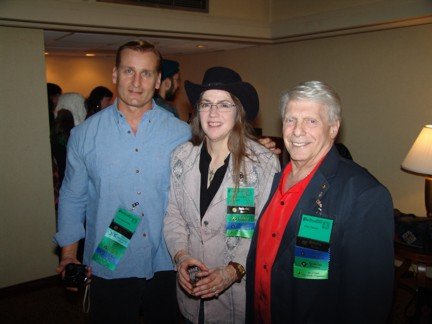 Chic and I with Tony
Mierzwicki 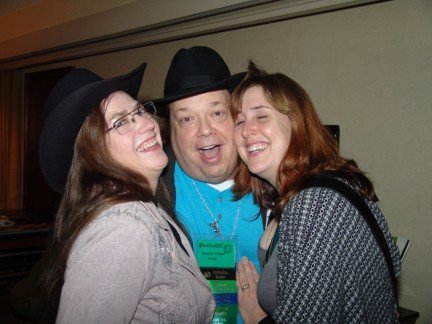 With Don and Holly Kraig.