The Hermetic Order of the Golden Dawn, Inc. (also known as H.O.G.D. Inc.) is a non-profit Florida organization incorporated in 1988 by Charles “Chic” Cicero. The stated purpose of the corporation is educational, spiritual, and philosophical. The primary goal of the organization is the continued preservation of that body of knowledge known as Hermeticism or the Western Esoteric Tradition. This organization promotes the teachings of the original Hermetic Order of the Golden Dawn, a magical fraternity founded in London in 1888 by Dr. William Wynn Westcott and Samuel Liddell “MacGregor Mathers,” which officially ceased to exist under that name in 1903 but continued for a number of years under the names of two spin-off organizations, the Stella Matutina and the Alpha et Omega. H.O.G.D. Inc. maintains this website as a resource for all Golden Dawn students, provides certification to other Golden Dawn groups, and makes student referrals to various mystery schools, esoteric orders, hermetic temples, and fraternal organizations.

Our corporation, H.O.G.D. Inc., has been and continues to be the sole and exclusive owner of:

United States Trademark Registration No. 2,034,866
THE HERMETIC ORDER OF THE GOLDEN DAWN & Design. 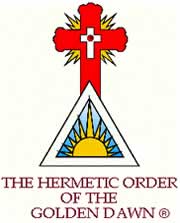 An affiliated organization, the modern-day Hermetic Order of the Golden Dawn, (also known as H.O.G.D.) is a magical Order reactivated in 1977 in Columbus, Georgia. This Order’s mentor and guiding light was the late Dr. Israel Regardie, our Very Honored Frater A.M.A.G. The contemporary Order does not claim institutional lineage to the original Order of the Golden Dawn, but it does claim initiatory lineage to the original Order through Israel Regardie. The modern Order follows the traditional hierarchical structure of the original Golden Dawn Order in England with a ruling triad of Officers known as the “G.H. Chiefs” who govern both the First or Outer Order as well as the Second or Inner Order (known as the Ordo Rosae Rubeae et Aureae Crucis or the RR et AC). The modern Order also follows the traditional teachings, grade structure, and ethos of the original Order. Although it currently has a worldwide membership with temples in several countries, the HOGD is generally private and membership is by invitation only.

The Order and the corporation are related organizations, but they are not one and the same. However, both organizations are on friendly terms with several other Golden Dawn groups and various organizations in the wider esoteric community.