The Elementary View of Man

The following diagram will of course be immediately recognised by all of you: 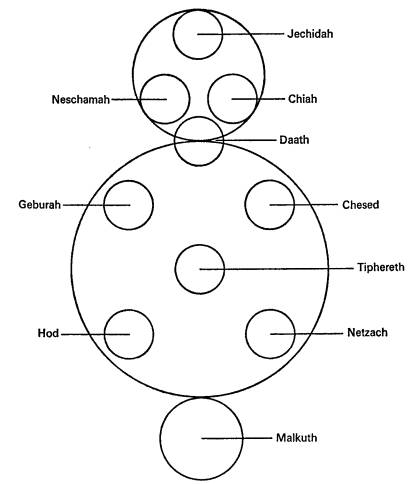 Now supposing a physical man to be here represented, Kether is the Crown and is above the head. The junction of Chokmah and Binah in Daath is in the head itself. Then Chesed and Geburah will correspond to the arms and shoulders, Tiphereth and Yesod to the trunk and body, Netzach and Hod to the hips and legs, and Malkuth to the feet alone.

Now I will put to you the question, where was the mystic body of our Founder, Christian Rosenkreutz discovered? In Tiphereth. And what is Tiphereth? The centre. That is to say it is in the centre of the middle Sphere and when that middle Sphere is projected what does it represent? The Polar Axis. Representing then the Polar Axis it will be in a sense invisible from the outside. Therefore the outermost form of the whole projection will be spherical. Now that would imply that Tiphe­reth corresponds to the heart and Tiphereth represents the place where the Chief Adept is found and it is the Polar Axis, and the influence which is surrounding this physical body of the man is a Sphere like that of the Universe. This Sphere then sur­rounds the body. Thus it will be the Assiah Plane of the Man, the Malkuth containing the reflection of the other Ten Sephiroth. Now this Sphere is what we of the Rosicrucian Order, call the magical mirror of the Universe, or the Sphere of sensation of the Microcosm. It is the Aura of the man. Now you will understand that as the Chief Adept is placed in Tiphereth you may expect to find the most vital portion of the body about the heart. The heart will therefore represent the King of the physical body. All this is, of course, much better explained in the lecture on the Microcosm which you will get later on.

This sphere, answering to the Sphere of the Macrocosm, you will naturally expect that it will have the forces of the Macro­cosm reflected in it. Towards which part of the Zodiac then would you expect the man in the centre to face? He will face towards that point in his Sphere of sensation which represents the ascending degree in his horoscope and that ascending degree will therefore be the point which is opposite. His object is the development of the Daath principle which is in the head. This principle is, you will observe, the link between Ruach and Neschamah.

Now thus is the Consciousness attributed. In Chiah is the beginning of the Self of Man. The real Self is in Jechidah, and its presentment in Chiah. Thus Jechidah is called the Divine Con­sciousness ‘Conscire’ means ‘to know with’ and ‘to be in touch with’ and only your Kether can do this as regards the Divine and your Kether is then the Divine Consciousness. In Ruach is the human Consciousness and the human Will. In Jechidah is the Divine Will; so that the human Will is like the King of the material body. The automatic Consciousness, as it is called, is in Yesod, and has to do with the lower passions and desires. Being automatic, that is moving of itself, it can hardly be said to be Will. Now this is the danger which threatens the man who yields to the temptations of the lower desires. The Human Will which should be seated in Tiphereth, in the heart, is attracted to contemplation of, and union with, the automatic Conscious­ness so that the human Consciousness abdicates its throne and becomes automatic. You will find in the life history of men that vice brings about a species of automatic condition which com­pels them always to move in the same grooves, and it is a known fact that it recurs at regular intervals like a disease, and it is indeed a disease.

Now in Daath is the Throne of the Spiritual Consciousness and Daath being the result of Chokmah and Binah it is the pre­sentment of the seven following Sephiroth, that is to say that in the head are the seven planets of which the eyes will answer to the two luminaries—the right to the Sun and the left to the Moon.

You will now at once see that spiritual consciousness does not partake of the physical body but is the light which radiates. The way in which thought proceeds is by radiation, that is to say, its rays are thrown vibrating through this sphere of Astral Light. This will explain to you a very fruitful source of mistaken Clairvoyance. The many errors arise therefrom: It is really a selfish­ness of the thought plane. The Consciousness is content, as it were, to receive the reflections which are in its sphere and which have necessarily been modified by the person himself. Let us take an example of individual modification and we will choose that of the planet Mars. Fire will be red. That is to say, that in all cases of a fiery nature the judgment will be fairly accurate. But the fault will be manifest when you come to a watery nature. It will then be represented by violet instead of by blue as it should be, and he will always want to bring the nature of the Fire into the watery natures. Here then is a fruitful source of error in Clairvoyance, especially arising in natures which are not selfish in the ordinary sense, but which have that more subtle selfish­ness which arises from too much study of oneself. This is why, in our system of Occultism we are contrary or converse to that taught by the Theosophical Society. The Theosophists appar­ently advise the student to commence with the study of the Universe; and while I quite agree that he may arrive at his end by that means, there is the danger of that spiritual or thought-selfishness, and this is the reason why we study the Microcosm before the Macrocosm.

This continual dwelling on one’s own nature with the idea of reforming and making oneself better is apt to give you too con­tracted a view, and you are threatened with the selfishness which you have yourself engendered. This is also the danger of too great asceticism, because it is apt to bring about the feeling that you are better than another person. These are the dangers. If you can escape these dangers you will arrive at the goal. There­fore to the student who is studying Clairvoyance, it is particu­larly advisable that he should rather repress that form of it which tends in his own direction, for feat of encouraging that spiritual selfishness which is so subtle as to escape his attention until it is too late. If he continues along this path his errors will increase, and he will arrive at a period of depression. From this will arise a series of miserable feeling which might have been checked in the beginning.