By Harry and Nicola Wendrich

A selection of paintings from the HorusHathor Tarot Deck*

The HorusHathor Tarot Deck has been researched by author Nick Farrell, and painted by Harry and Nicola Wendrich. The aim has been to prepare a modern Tarot deck which uses the symbolism of the Hermetic Order of the Golden Dawn. This makes the cards suitable for Temple use, as well as for individual meditations and magical work.

A selection of paintings from the Tree of Life series

This series of paintings on the Tree of Life was inspired by the Egyptian godform Thoth, whom I encountered in meditation. From that encounter, the painting ‘Hod’ came into being. It was painted as an aid to study, but no sooner had I finished it than I had a dream about Anubis, and so ‘Netzach’ was born. I realised that the Egyptian Pantheon had opened up for me in meditation, and so I began to paint them as I encountered them, according to my understanding of their placement on the Tree of Life.

The glyph of the Tree of Life as a whole shows the process of Creation. The 32 paths were sketched out of the book of Genesis, where God’s name Elohim is mentioned 32 times. The first 10 were to do with Creation itself, and these then are the 10 sephiroth. The 32 paths could be considered aspects of God within His Creation. 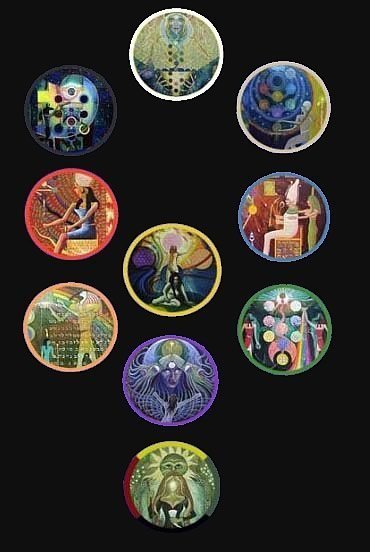 The Tree of Life has three pillars, the one on the right is called the pillar of mercy, and has a masculine influence. The left hand pillar is called severity and has a feminine influence. I have placed the Egyptian godforms on these pillars to represent potencies or intelligences that need balancing. The middle pillar is the balance of the two outer pillars. Here I have placed goddesses from Celtic mythology, and Christian and Hermetic imagery. This to me represents the three-fold path of the Green Ray.

Each painting has its own planetary influence and some have magical squares. But it must be remembered that the Tree of Life presented here is personal to me, and although there is only one Tree of Life, in each of us it differs according to our life’s journey back to God.

I was born in a small village in Germany, Stadtoldendorf, in 1954, but lived there for only a short time. We moved to South Wales, where my father worked as a master shaft sinker, developing the coal industry in Wales. My father also instilled in me a great love of motorbikes as he took me for rides on his 500cc Triumph.

When I left school I too became a miner, and soon bought my own bike, an obsession that lasted a long time. But beneath the biker exterior, a mystic and artist waited to break through the mask created by outer circumstances, and at the age of thirty some bizarre mystical experiences changed my outlook on life, and its course.

I have been meditating for many years and have had many spiritual experiences which are difficult to describe in words. Art is unique in its ability to pictorially describe the inner aspect of humanity which no camera can portray, and for which no words in our language exist – our language has only a few words to describe a potentially vast area of human influence which is encapsulated in a word – spirit and/or subconscious. Art is a language where spirituality can be expressed in a way that is not egocentric, but Theocentric, giving the viewer an experience which can be relevant to his own intuition.

I have been studying the Kabbalah for many years, and find it a useful tool to define the different levels of the mind. I like to use the Egyptian godforms to depict the energies which can be found and utilised by the mind. I have also used Celtic and Christian imagery which are closer to my heart and ancestral background.

My paintings offer more than a visual sensation, in that they work on the inner mind of the viewer, subtly introducing an inner frequency which is outwardly portrayed in a visual format through colour and symbolism. There is also a prophetic side to our work which comes through significant dreams. This will be a continuous influence in our work.

I paint scenes from significant dreams that I have had since the year 2000, which have a prophetic content. I am interested in using art as a means of conveying prophecy, in addition to the spoken and written word. My current work was given to me in a dream by my Higher Self: to paint images of Jesus.

I am also responsible for the painting of the Minor Arcana of the HorusHathor Tarot Deck, which I am enjoying immensely. I was also given a dream once I had completed the Aces, wherein I was instructed to use only the three primary colours and white for the rest of these paintings. To mix one’s own colours from the primaries is a very magical process, putting one in touch with the colour frequencies of the image in an experiential way.

* The copyright disclaimer on the Tarot cards is for display purposes only.To view more Tarot cards & paintings visit the website at: